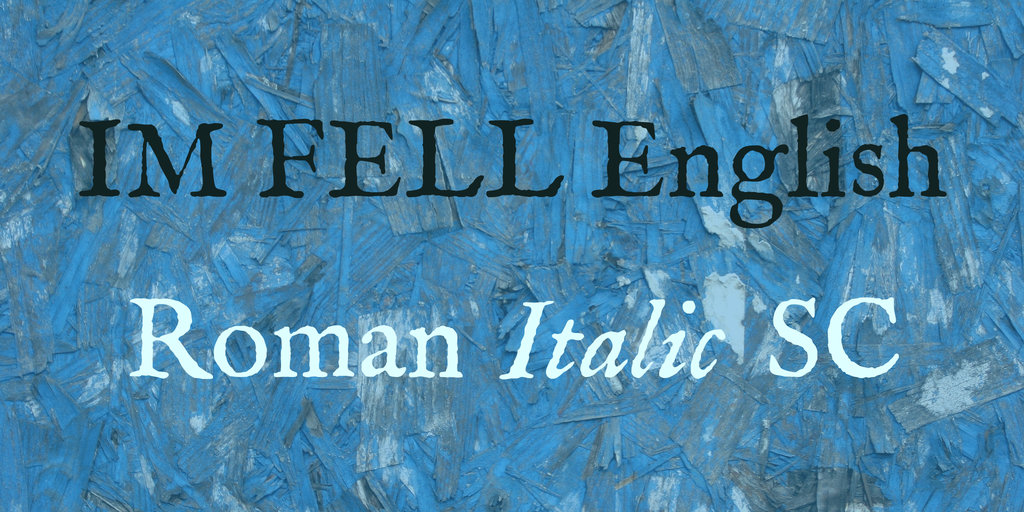 Download IM FELL English Font Family for free. IM FELL English Font Family is a font / typeface offered for free by Igino Marini, the designer and original author. Please note that if the license offered here is non-commercial then you will have to obtain and buy a commercial use license. You can use the buttons to the right to download the free font or search for a commercial font license.

Fell Types – English size – Roman. Typeface from the types bequeathed in 1686 to the University of Oxford by John Fell. Originally cut by Christoffel van Dijck. To be printed at 13.5 points to match the original size. Autospaced and autokerned using iKern© developed by Igino Marini.

STANLEY MORISON, in his “THE ROMAN ITALIC & BLACK LETTER bequeathed to the University of Oxford by Dr. JOHN FELL” (Oxford University Press, Oxford, 1951), began this way the description of the FELL TYPES: “The Oxford Printing house holds the oldest punches and matrices surviving in England, material not only treasured but used; types cast therefrom being employed for the composition of books and other printed matter.”
It’s essentially the inheritance of the will of John Fell, D.D. who died on 10 July 1686, aged 61, Bishop of Oxford and Dean of Christ Church. Since 1668 he spent his life creating a ‘learned press’ in Oxford, endowed with invaluable equipment, setting a high standard for the future of his publishing.
He wrote: “The foundation of all successe must be layd in doing things well, and I am sure that will not be don with English letters” (to Jenkins, 2 Dec. 1672). So he collectected types available in the foreign market: mainly France, Holland and Germany. Fell decided to develop types in its own ‘workhouse’ too.
Peter De Walpergen became his personal type-founder. Says Harry Carter in “THE FELL TYPES. What has been done in and about them” (Oxford University Press, New York, 1968): “He was born at Frankfurt am Main, descended from a Protestant refugee from Antwerp. He was engaged by the Dutch East India Company in 1671 to work as a type-founder and printer in Java. The comparative crudity of his letter design makes it seems unlikely that he had been trained to cut punches.”
John Fell entrusted him with the cut of the larger bodies: Great Primer Roman and Italic; Double Pica Roman and Italic; French Canon Roman and Italic; Three Lines Pica Roman. De Walpergen cut other types and letters for existing types to be harmonized with the larger bodies. Commented Morison: “The design of these large Fell Types is difficult to characterize and impossible wholly to approve. It has some affinity with the Dutch work of the second half of the seventeenth century, especially with the bigger size of type shown in the Widow Elsevier’s specimen-sheet of types attributed to Christoffel van Dyck; but De Walpergen went much further in the contrasting weight of thick and thin strokes and his design has crudities about it of which Van Dyck would not have been capable.”
In 1686 John Fell died. In his “will” he bequeathed the entire collection of type to the University of Oxford. Remembers Morison: “This entire collection of ‘founding Materialls of Punchions Matrices Moulds’ was ‘got together’ by John Fell ‘and others at great expense’. Fell’s instructions that they ‘be carefully kept together’ by his executors were duly observed. The Chancellor, Masters, and Scholars of the University of Oxford honourably played their part in sustaining the interests of ‘learning and printing’ and thus the collection was not dissipated but manteined entire.”